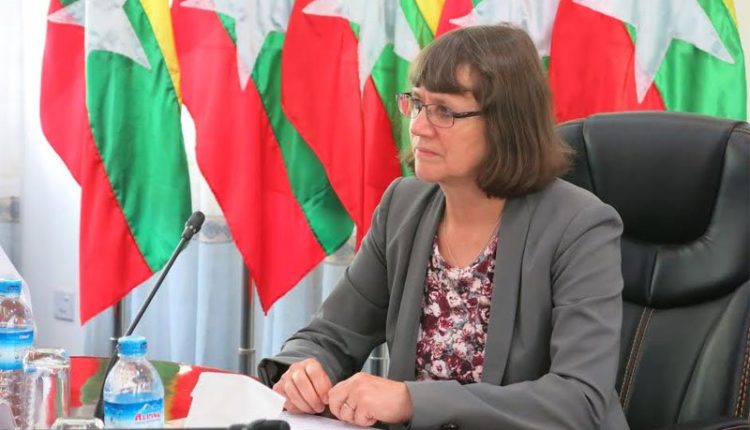 The German ambassador spoke of the value of vocational training at the inauguration ceremony of the No. 1 Industrial Training Center (Sinde) held in Pyay on February 8.

The project is co-funded by the German government and the Myanmar government.

Mrs. Dorothee Jantzke-Wenzel, German Ambassador to Myanmar, had the following to say at the event:

“In 2016, the State Counsellor Daw Aung San Suu Kyi called for the promotion of vocational education in Myanmar with a notion that education is the ability to overcome life’s challenges and obstacles. She has called on students and their parents to value the vocational training as it is an educational path that meets their interest and can enhance their lives.

Germany fully agrees with the State Counsellor: Vocational training is an important element in moving Myanmar forward. It is not only a sound and good part of the individual education of a student, but also an important cornerstone for building a successful economy. Only with skilled staff is the private sector, especially small and medium seized enterprises, capable to develop further. Without appropriate qualified staff, local companies are limited in fully tapping their potential and to be competitive.

Germany has a long tradition of vocational training. The so called dual education is regarded as one of the key elements for Germany’s economic success. The “Handwerk” has a proud and long-standing place in Germany’s culture and economy.

The same can be said for the Industrial Training Center Sinde: it has a long-standing place in Myanmar-German relations, as we have been cooperating in Sinde for almost 40 years now. Next year, we’ll be able to celebrate the 40th anniversary of the ITC Sinde. Because of the political situation in Myanmar in 1988, Germany interrupted the cooperation, but the ITC Sinde was the first vocational training centre, where we restarted our cooperation in 2012.

Germany would like the MMR transition to democracy to be successful and is happy to give support. Transition means on the one hand that civil rights, rule of law and freedom can be enjoyed. On the other hand it means that all people in the country can feel a change for the better in their own personal life and their economic situation. As a consequence, Germany is supporting MMR, e.g. in institution building and civil education. But also cooperates in order to improve the livelihood of the people in MMR.

Since 2012, Germany has supported ITC Sinde to become a Center of Excellence: Not only did Germany support the procurement of modern machinery, but it also supported ITC Sinde in developing further the curriculum and the training of the teachers. Most of the ITC Sinde teachers have participated in trainings focusing on pedagogical aspects as well as technical subjects.  For all of this, ITC Sinde has received strong support from dedicated development advisers, integrated experts and local and German consultants.

I would like to thank everybody who contributed to the success. Let me particularly thank the principal and staff of ITC Sinde. The active involvement and enthusiasm of the management and training staff throughout the implementation of the project was an essential element of the success of the project.

A thriving economy is essential for Myanmar’s further development. What is also necessary is an inclusive society in which all different ethnic groups can peacefully live and work together. I am convinced that learning together is a very good method for getting to know each other better and for understanding the differences but also the commonalities of persons from different ethnic and regional backgrounds. Friendships that are made during the years of studying together very often last for the life.

Dear students and trainees, I trust that you make the most of your training and education here at ITC and that you will be able to contribute to the economic development of your country. The State Counsellor rightly emphasised the paramount important of vocational training. Being a student at the ITC Sinde, should make you very proud.

Today’s inauguration of the project of development of No. 1 Industrial Training Center marks a milestone of a Myanmar-German Vocational Training Program. Germany is happy to continue to work with you by supporting yound people in this country and also supporting the development of MMR.”