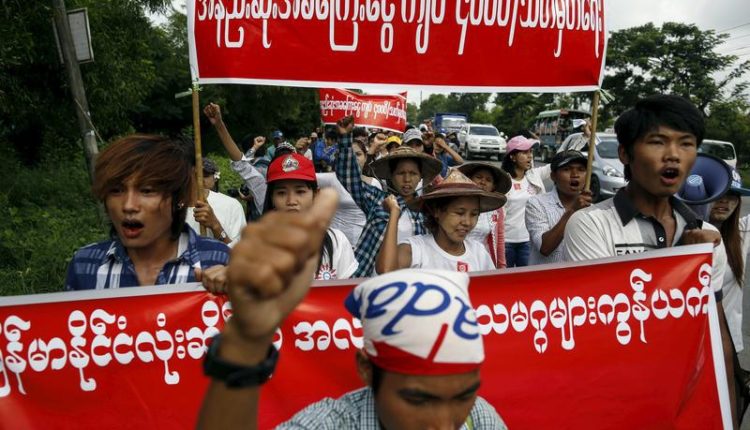 A bill to amend Burma’s controversial Peaceful Assembly and Procession Law has been submitted to the Upper House for debate.

Putting the motion forward yesterday in parliament, Dr. Myat Nyarna Soe, an MP for the ruling National League for Democracy, proposed amending the law so that citizens or organisations seeking permission to hold a rally will inform the relevant local authorities of how much money will be used to fund the gathering and who exactly will fund it.

The existing provision only requires applicants to present a schedule of when and where they intend to hold an assembly, as well as an estimate of the number of attendees.

The bill adds: “If there is evidence that a person is giving money, material goods or other types of favours [to attendees] to join the assembly, with the intention of disrupting security, rule of law, tranquility or public morality … then he or she may receive a maximum sentence of three years imprisonment and a fine.”

The motion was approved and will be tabled for debate in the coming days.

Human rights and civil society groups have long criticised the Peaceful Assembly Law, or more specifically its Article 19 provision, saying it has been used by the government and military to suppress opposition.

Among those who have fallen victim to the controversial act are: veteran activist Naw Ohn Hla, who was jailed in 2016 for organising protests against the Letpadaung copper mine;  four students in Mandalay who staged a rally last year outside a government education office; and Su Su Nway, who led some 1,500 farmers in 2014 in demonstrating against military land seizures.

Military Junta continued to use force and death toll reached 193