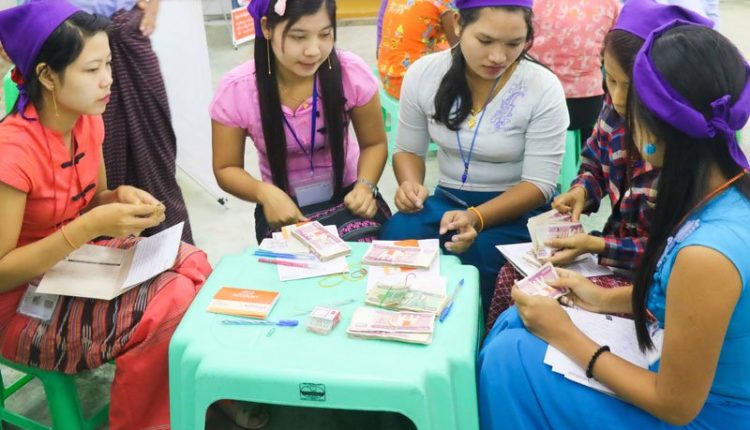 Kanbawza Bank (KBZ Bank), the largest privately-owned bank in Myanmar, is to support the improvement of the standards of living for women agricultural producers in the central part of Myanmar by providing access for financing, partnering with Action Aid Myanmar, a non-profit organisation operating here since 2006.

“As the first year pilot phase, we have been investing around MMK 100 million to 120 women farmers and traders in Pakokku, Magway region, who have been unable to access the country’s financial system,” Soe Tin Maung Zaw, senior general manager at KBZ Bank, said.

According to the pilot phase, KBZ Bank and Action Aid Myanmar allocated and invested the finance to support  MMK one million to one and half million for each female farmer with an interest rate of 13 percent per year, with the coordination of the central bank of Myanmar.

Senior general manager Soe Tin Maung Zaw said, “This programme started in November 2017, and we gave financial assistance to the five villages from Pakokku township, and we allocated around MMK 18 million for each village.’’

He said, “Action Aid Myanmar has consistently been improving the women sector in Myanmar, in which we aim to promote sustainable income through improved access to capital and alternative livelihoods with a focus on women’s empowerment. Besides, we also have been working to see more growth in Myanmar’s agricultural industry by considering women’s roles simultaneously.’’

“According to our research here related to the difficulties in the agricultural industry, we found that there has been high involvement with women having a leading role in agro-industry because most men who always used to help at the land ploughing period have to find another job to earn extra income and move to other cities. So women are responsible for the rest of the farming process until they sell their products,’’ he continued.

“We see this situation happen especially in the dry zone. Men go to other cities or neighbouring countries as migrant workers,’’ he added.

This project will be piloted over twelve months, with Action Aid Myanmar providing collateral for underwriting the credit, and is expected to help women unlock their entrepreneurial potential and to provide for their families.

Nang Lang Kham, deputy CEO of KBZ Bank remarked: “As Myanmar’s largest lender, we believe that our core value of improving people’s lives through banking runs through everything we do. By providing loans to female smallholder farmers who only need to provide proof of land ownership under the piloted project, we aim to extend financial products to those who would not previously have had access to them.’’

Agriculture plays a vital role in Myanmar, and it accounts for one-third of the country’s GDP and employs 70 percent of the population.

Traditionally, the banking and financial systems were only accessible to the country’s affluent population; the majority of farmers are unbanked smallholders and must endure paying back high-interest rates of between 60 to 100 percent to local money lenders if they want to obtain loans to expand their businesses or diversify their crops.

Chinese New Year to be celebrated on a grand scale in…

Zin Mar, one of the female farmers from the dry zone living in Hle Chaung Pauk village, said: “Our village has 75 households, and more than 50 people are farmers, and they work in the farm industry. Moreover, we have frequently been facing natural disasters like drought and flood, and we especially suffer from the flood because our village is situated on the bank of the Ayeyarwaddy river, besides we could not forecast weather which provides water to our farm.’’

“Therefore we had to lose our crops like chilli plantation and peanut farm, and we need more investment to recover these losses. So we had to borrow money from local lenders at the high-interest rates,’’ she added.

“We definitely experienced many worries when we obtained loans from local money lenders because of the high-interest rate, and we were not able to pay back in time. Now I think we will benefit from the KBZ Bank’s financial assistance because the bank set the time-period for paying back so we can sell our products at good prices,’’ Thandar Oo, who obtained a loan from the bank, a female farmer from Nyaung Pin village from Pakokku township, told Mizzima.

“Our core work is poverty reduction and women’s empowerment, so this pilot opens up opportunities for women farmers that they have not had previously,’’ he said.

A portion of the return made by KBZ Bank from the loan repayments will be re-invested into the community in collaboration with the Women Agro Producers Network.

Additionally, KBZ Bank aims to facilitate the expansion of market access, and the bank will connect the female farmers who obtained loans from the bank and the merchants.

Yu Wai Maung, head of corporate social responsibility at KBZ Bank told Mizzima, “We will invite women growers, producers and merchants to our office and introduce and let them discuss the negotiated prices on the products through the Women Agro Producers Network.”

The project will be evaluated for its impact and success, with plans to continue and extend the scheme to other parts of the country in the future.