Ten Rohingya Muslim men kneel with their hands bound as members of the Myanmar security forces stand guard in Inn Din village on Sept. 2, 2017. The photo has been published as part of an extensive Reuters investigation into the massacre of the 10 men, who were fishermen, shop owners, high school students and an Islamic teacher. Reuters 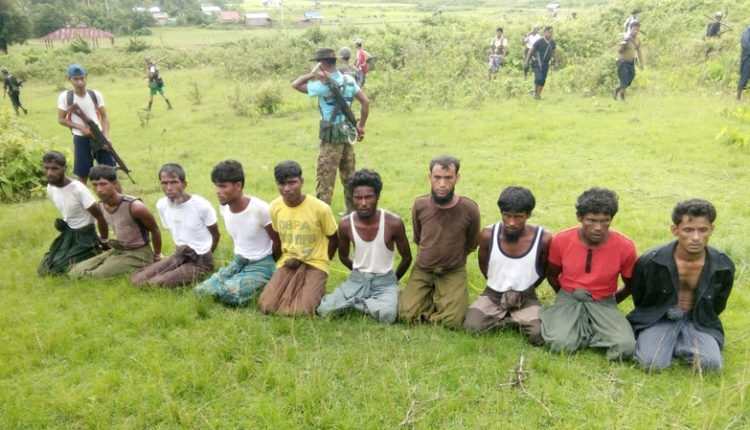 Reuters has published an extensive report into the killing of 10 Rohingya men in Myanmar in September, pulling from photographs and eyewitness accounts to describe how villagers and paramilitary forces killed the men execution-style and buried them in one grave.

The investigation made headlines long before it was published.

While working on the story, two Reuters journalists were arrested by Myanmarese authorities and accused of violating the Official Secrets Act. The men, Wa Lone and Kyaw Soe Oo, have been detained since December and face up to 14 years in prison.

The journalists’ detention has prompted outcry from governments and human rights groups around the world. Reuters says the two men are innocent of wrongdoing and were arrested for doing their jobs, as “journalists who perform a crucial role in shedding light on issues of global interest.”

Over £1bn Stolen Through Credit And Debit Card Fraud In…

Now the world can see the results of their work in “Massacre in Myanmar,” the story published by Reuters overnight.

Wa Lone, Kyaw Soe Oo, Simon Lewis and Antoni Slodkowski describe how in early September, paramilitary troops and Buddhist villagers tied 10 men together and killed them with machetes and gunfire.

For months, the persecuted Rohingya Muslim minority group in Myanmar has been targeted in a wave of violence that the United States has denounced as “ethnic cleansing.” In a single month, more than 6,700 Rohingya Muslims were killed in Rakhine state, where the conflict erupted, according to Doctors Without Borders.

Hundreds of thousands of refugees have fled the violence, setting up in makeshift shelters in camps in Bangladesh. The conditions in those camps are dire, as NPR’s Jason Beaubien has been reporting.