UNFC TO FADE AWAY: How will the government handle the FPNCC? 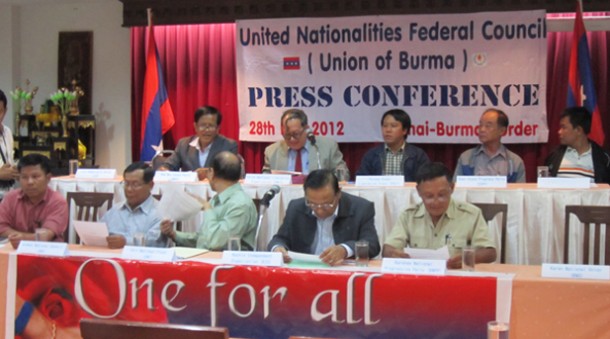 As one could just enthusiastically proclaims “and then there were ten,” to the 8 Nationwide Ceasefire Agreement (NCA)-signatory Ethnic Armed Organizations (EAOs) another two, the New Mon State Party (NMSP) and Lahu Democratic Union (LDU) will be joining the signatory fray soon.

The NMSP and the LDU jointly announced that they would sign the NCA shortly after having separate meetings with State Counselor Aung San Suu Kyi and Senior General Min Aung Hlaing, Commander-in-Chief of Defense Services, on January 23.

The count of signed signatories has been constant for more than two years since the 8 EAOs first sign the NCA on 15 October 2015. The former President Thein Sein led Union Solidarity and Development Party (USDP) and the present Aung San Suu Kyi’s National League for Democracy (NLD) both governments have been trying to increase the count of signatory EAOs to realize their “open-door policy” line of groups signing whenever they are ready, as a means to compensate the governments’ failure of having to resort to partial ceasefire agreement instead of adhering to an all-inclusiveness policy.

But the joining of the two said parties is a plus point for the embattled NLD regime reeling under the international pressure for its inappropriate handling of the Arakan or Rakhine crisis, stagnation of the peace process and heightened internal armed conflict in Rakhine, Chin, Kachin and Shan States, just to name a few major difficulties that the government is recently facing.

Suu Kyi when meeting the NMSP and LDU in Naypyitaw at NRPC office said: “We will go together in the search for peace. We will have to walk step by step. Every step is of great importance.”

She stressed further: “I thank the Mon and Lahu ethnics, our national brothers and sisters, for joining hands with the government in order to achieve peace-based developments for the perpetuation of our Union. This step is not meant for us, but it is meant for future generations. For that reason, I believe that the entire Union people will feel proud and delighted,” according to the Eleven Myanmar’s recent report.

In the same vein, Commander-in-Chief Min Aung Hlaing also met the NMSP and LDU separately at Bayintnaung Yeiktha in Naypyitaw. During the meeting he was said to have told the delegates that “the successive governments have tried to achieve peace since the independence; the Military or Tatmadaw is ready to join hand with the EAOs to achieve peace and they shouldn’t be doubtful and be trustful (on it) in the implementation; the need of understanding not only among the leadership but also the lower ranks; and the importance and need for cooperation along the line of multiparty democracy system.”

Regarding the details Zaw Htay, Suu Kyi’s spokesman, told the 7 Day Daily that the date to sign the NCA for the two parties is not yet fixed but would happen as soon as possible.

He further elaborated that the United Nationalities Federal Council’s (UNFC) 8-point NCA amendment proposal will be discussed, between the government and the NMSP and LDU separately which will be not under the banner of the UNFC.

He stressed: “After this is finished, we will sign the NCA. After that Mon national-level political dialogue or consultation issue will have to be discussed. All in all it could be said that the two parties are being added to the 21st Century Panglong peace process.”

He further added that the government would try to include KNPP and other non-signatory EAOs. The KNPP however said that it would be impossible for the time being to sign the NCA.

The distrust on the Tatmadaw is said to be still very real with the extra-judicial killings of the 3 KNPP soldiers and a civilian on December 20. Besides, one of the 8-point NCA amendment proposal still cannot be agreed yet, said Khu Daniel the KNPP Second Secretary.

With the latest development in Burma’s political arena, it seems every party is gaining except for the UNFC, which has started to disintegrate since the 8 EAOs’ signing of the NCA in October 2015.

The UNFC formed in February 2011 has originally 14 EAO members at its height but lost its first badge of 5 in 2015, followed by 5 in 2017, leaving just 4 until mid-January of this year. At the present, with the NMSP and the LDU agreeing to sign the NCA soon, only two – the Karenni People Progressive Party (KNPP) and Arakan National Council (ANC) will be left.

This leaves the KNPP to decide on how to go further in its struggle to achieve rights of self-determination. Practically speaking, it is faced with joining the NCA signing like its two members, struggle on alone or join the 7-party Federal Political Negotiation and Consultative Committee (FPNCC) headed by the United Wa State Army (UWSA).

In sum, the government would gain some more plus point from the two EAOs joining the peace process. The FPNCC has already benefited from the UNFC disintegration with five parties joining its setup, during the past two years.

With the UNFC total disintegation, a little bonus that the government would receive from the two EAOs joining the peace process fray would likely give a moral boost for the government, which hasn’t made progress since 2011. But the overall military balance between the non-signatory EAOs and the government wouldn’t make much of a difference, as of the recent two EAOs about to sign the NCA, only one has a few hundreds soldiers and the other has almost no combatant. Thus, the 80% EAOs from an estimate of 100,000 would still be pitted against some 300,000 government troops.

And the government refusal to talk to the FPNCC as a collective group hasn’t make much headway in trying to move the peace process forward, to break the deadlock and usher in an all-inclusive participation of all the EAOs.

For now, it is hard to imagine on how the peace process will pan out. But the unofficial visit and rumors to woo the UWSA with accommodating its state-level administrative aspirations by the government is said to be in the pipeline so as to disrupt and possibly destroy the FPNCC solidarity.

But one sure thing is that the UNFC is out of the picture in political equation and the government now only need to deal with the FPNCC.

How the UNFC fall apart