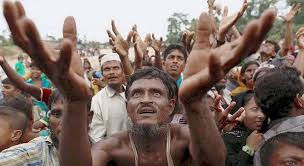 As per the bilateral agreement between Myanmar and Bangladesh, the repatriation of Rohingya refugees from Bangladesh to Myanmar begins today. However, there are concerns, apprehension, and a certain degree of danger surrounding the move.

At least four critical issues need to be given close attention — non-refoulement, safety and security, identity and citizenship.

According to the bilateral agreement, Myanmar has agreed to accept up to 1,500 Rohingya each week in an attempt to bring back over 740,000 people who fled to Bangladesh following the October 2016 violence. The agreement does not include refugees prior to 2016.

The plan is that Bangladesh will provide an advance list of prospective returnees with forms attesting to their residency in Myanmar. Myanmar will then verify and send back the approved list to the Bangladesh authorities.

The two countries agreed that Bangladesh would establish five transit camps close to the border between the two countries, from which Myanmar will initially receive returnees in two reception centers and a temporary camp near Maungdaw in Rakhine state. Some returnees will cross over by land and others via a river along the border.

But before they return to Myanmar, the refugees want assurances from the authorities in Myanmar that they will be returned the lands they previously held, and their homes, mosques and schools rebuilt. However, there is no guarantee that these demands will be fulfilled.

One immediate concern for the refugees and many in the international community, including the United Nations, is whether this repatriation will be just a symbolic transfer of refugees from camps in Bangladesh to camps inside Myanmar.

UNFC TO FADE AWAY: How will the government handle the…

The refugees want the Myanmar military to be held accountable for alleged looting, rape, killings; the release of innocent Rohingya who were arrested during the counter-insurgency operations in the aftermath of the Aug 25 attacks last year. The refugees also want Myanmar to stop listing people with their photographs as terrorists in state media.

Amidst these lingering concerns, many observers believe the timing of the repatriation to be premature. Part of the bilateral agreement is that the repatriation will be on a voluntary basis. However, most of the refugees at the moment are still reluctant to return even if they are eligible under the 1992 repatriation pact the two countries signed, that is, individuals need to prove they were resident in Myanmar.

The apprehensions of the refugee population are exacerbated by the fact that more than 100 Rohingya crossed into Bangladesh from Myanmar since last Wednesday and scores more were waiting to cross the Naf River that forms the border.

The new arrivals said they fled because of military operations in their village of Sein Yin Pyin in Rakhine state. They said young men were being rounded up and dead bodies were discovered in a pond and a forest. They reportedly fled out of hunger, after hiding in their homes for days, unable to go to work in the fields and forests that provided their livelihood.

While the target is to repatriate 1,500 refugees every week, the situation on the ground does not seem to be conducive enough for the refugees to return, at least at the moment. There is a danger that the authorities in both countries may be violating their own agreements on non-refoulement if they insist on fulfilling the weekly fixed 1,500 figure. If that is the case, it will also be a violation of the 1951 refugee convention.

The other two closely related major concerns are the questions of ethnic identity and citizenship. Though the Rohingya refugee crisis has made international headlines in recent years, neither the name nor identity is officially recognised nor included among the 135 national races in Myanmar.

Instead, they are considered as Bengalis, implying that they are illegal immigrants from neighbouring Bangladesh. Now the plan is that once the refugees, provided that they are eligible, go back to Myanmar, they will be issued national verification cards which will allow them to apply for citizenship. At this point, there is no guarantee that all returnees will automatically be entitled to citizenship.

One worrying point, which the international community largely ignores or fails to understand is the simmering tension between the local Rakhine Buddhists and the Rohingya Muslims. This is one important reason why the Myanmar military commander-in-chief Senior General Min Aung Hlaing has previously said that the Muslims will be welcomed back if the local Rakhine Buddhist population is willing to accept them.

Because of these lingering concerns, the refugees have demanded that the Myanmar government makes a public announcement that it will recognise the Rohingya as one of the country’s ethnic groups and grant them citizenship. But the problem is that such assurances are not forthcoming from the Myanmar authorities — either civilian or the military.

Despite the several steps being taken by Myanmar and Bangladesh, all stakeholders need to understand that safety and security, identity and citizenship will remain the core issues of these stateless people. There is a possibility of a solution as well as a danger of subsequent waves of violence and refugee crisis.

Dr. Nehginpao Kipgen is Assistant Professor and Executive Director of the Centre for Southeast Asian Studies, Jindal School of International Affairs, OP Jindal Global University. He is the author of three books on Myanmar, including ‘Democratisation of Myanmar’.

UNFC TO FADE AWAY: How will the government handle the FPNCC?

UNFC TO FADE AWAY: How will the government handle the…